History of the toothpick 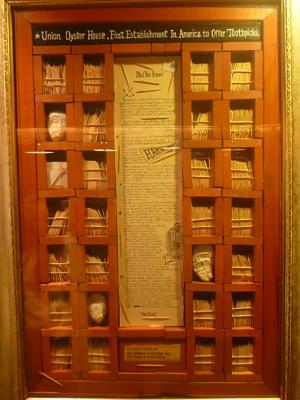 The toothpick is a routine part of northamerican dinning scene today. But it was not always so. Back in 1887 the humble toothpick made the long social climb from the jungles of Brazil to the very best Boston restaurants. And it was a group of hungry Harvard University students who helped the toothpick to become in.

Charles Forster, a native of Maine, came across toothpicks in South America shortly after the US civil war. He noticed that the natives whittled slivers of wood for use in removing particles of food from between their teeth.

Forster was impressed with the fine condition of the natives´teeth. When he returned to the US he brought several boxes of toothpicks with him.

Several year later Forster built a toothpick machine and opened a plant in the town of Oxford Country, Maine.

“The restaurant owners down in Boston weren´t interested in my toothpicks” he told an interviewer year ago. “They didn´t think proper Bostonians would want to sit around after dinner picking their teeth with a slender piece of wood.

“For a while, I was worried, I came across some Harvard scholars. They were all on limited budgets, but they welcomed the opportunity to eat a hearty meal at a fine restaurant. I made an arrangement with them. I offered to pay for their dinners if they would help me sell my toothpicks”.

Forster hired personable, well dressed Harvard men to dine at the fashionable Boston eating spot. He recalled “After dinner, the Harvard students, in a loud voice, was supposed to ask his waiter for a toothpick. If the restaurant didn´t have them, then the young men was supposed to complain loudly, and inform the waiter that he would never again eat in the stablishment”.

After five or six Harvard men departed the restaurant in a well rehearsed huff, the Union Oyster House had toothpicks available for its customers.

Restaurants all over town started serving them to customers, at the end of meals. They were brought in small trays.

Once the humble toothpick became socially acceptable in Boston, a citadel of propriety in those days, it was soon available in restaurants all over the world. Since then, Maine has become the toothpick center of the world. It is estimated that 100 million of them are produced daily in the state.

There are in a variety of shapes, sizes, colors, and yes, even flavors. That is enough toothpicks to fill a railroad freight car in a week. Placed end to end 100 million toothpicks would cover a distance of 7800 miles.